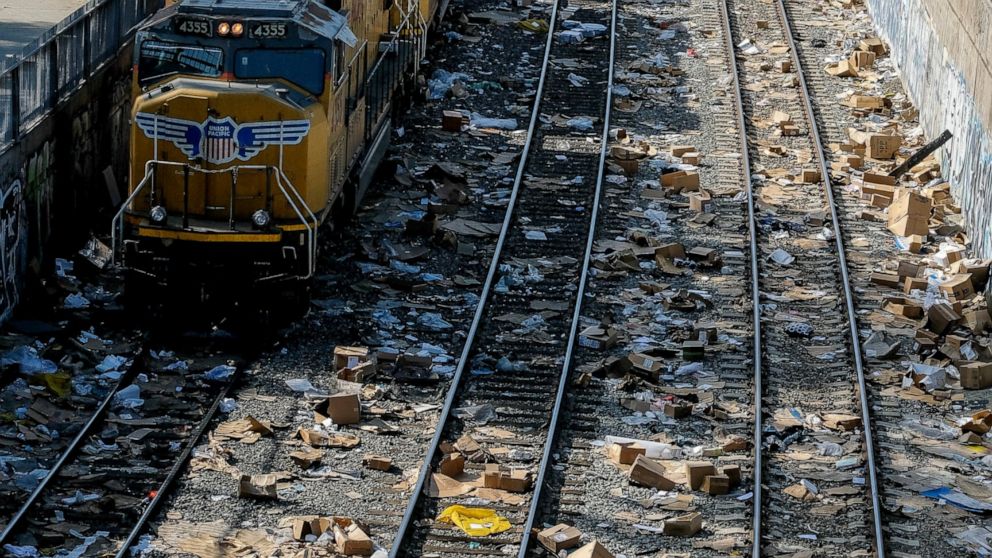 Crews are making railroad repair in Los Angeles after a train derailed near the location where thieves have been raiding cargo containers, leaving the tracks littered with empted boxes of packaged goods sent by retailers

LOS ANGELES — Crews made railroad repairs in Los Angeles Monday after a train derailed near the location where thieves have been raiding cargo containers, leaving the tracks littered with emptied boxes of packaged good sent by retailers.

It wasn’t immediately clear if the derailment that happened Saturday was caused by the debris left behind by thieves in the Lincoln Heights area near downtown Los Angeles. Union Pacific said the cause of the derailment was under investigation.

The derailment caused 17 train cars to go off the tracks, Union Pacific said in a statement. No injuries were reported.

Cargo containers aboard trains have been targeted by thieves for months, authorities said. The stolen packages are from retailers including Amazon, REI and others, the CBSLA television newscast reported last Thursday.

Union Pacific said in a statement to CBSLA that the railroad was concerned about increased cargo thefts in California.

“We have increased the number of Union Pacific special agents on patrol, and we have utilized and explored additional technologies to help us combat this criminal activity. We also will continue to work with our local law enforcement partners and elected leaders,” the railroad company said.

Amazon said it was directing inquiries to police. The United Parcel Service declined to comment on investigations into the cargo thefts but said the company was cooperating with authorities.