May 28 (UPI) — An area of disturbed weather that AccuWeather meteorologists were closely scrutinizing all week over the waters south of Mexico became the first named storm of the 2022 East Pacific hurricane season — Agatha — early Saturday morning.

Although Agatha is a small tropical storm, forecasters expect the storm to strengthen to a hurricane as it turns toward the Mexican coast into early week.

Satellite imagery on Friday depicted several large clusters of showers and thunderstorms broadly circulating over the waters south of Mexico, indicative of a large area of low pressure. These showers and thunderstorms developed a consolidated counterclockwise spin late Friday which prompted the National Hurricane Center to dub the feature Tropical Depression One-E. By 4 a.m. CDT Saturday, the depression had reached tropical storm status with maximum sustained winds of 40 mph, earning it the name Agatha. Winds had increased to 45 mph at 7 a.m. CDT Saturday.

In its 10 a.m. CDT update, the National Hurricane Center said the center of the storm was located about 215 miles southwest of Puerto Angel, Mexico. It was moving west-northwest at 5 mph. 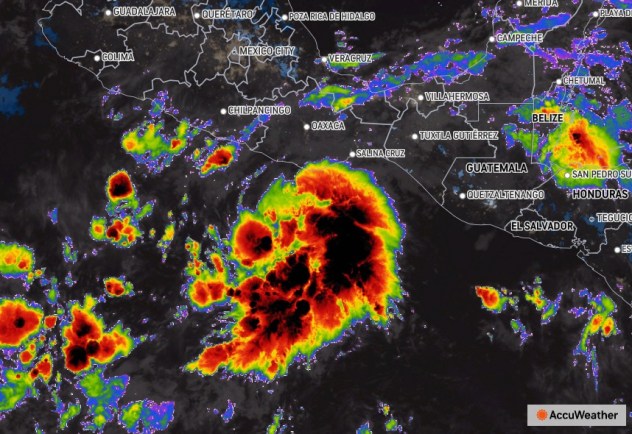 Forecasters say the system will remain in an environment conducive for continued strengthening up until it moves onshore in Mexico. By Sunday night, Agatha is forecast to reach Category 1 hurricane strength (maximum sustained winds of 74-95 mph).

Sea-surface temperatures in the area are more than sufficient for continued strengthening, and as of Saturday, the ocean water in this part of the Pacific Ocean was around 86 degrees Fahrenheit. At a minimum, a sea-surface temperature of 79-80 F is needed for the formation and maintenance of tropical systems. In addition, wind shear in the area is very light across this part of the basin, which will also contribute to the strengthening of the storm. 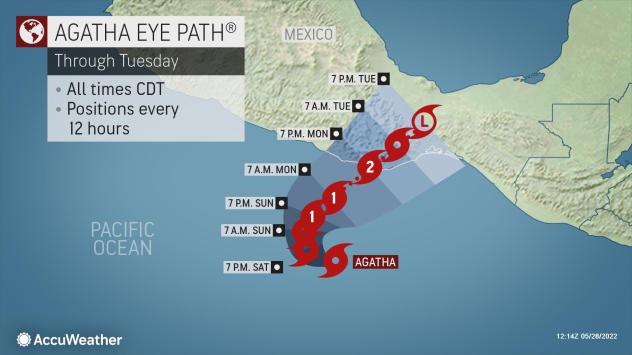 AccuWeather meteorologists expect Agatha to make landfall as a Category 2 hurricane (maximum sustained winds of 96-110 mph) Monday evening along the southern coast of Mexico in the state of Oaxaca.

Hurricane watches have been hoisted along the southern coast of Mexico from Salina Cruz to Punta Maldonado.

“Hurricane-force winds are expected near where the storm makes landfall along Mexico’s southern coastline, which can lead to downed trees, power lines and structural damage,” Dan Pydynowski, a senior meteorologist at AccuWeather who frequently issues tropical outlooks for the Atlantic and East Pacific basin, said.

An AccuWeather Local StormMax™ wind gust of 115 mph is forecast near where the center of Agatha moves onshore. Anyone without adequate shelter from these fierce winds may be subject to flying debris.

These strong winds can also kick up dangerous surf along the entire southern coast of Mexico, making it dangerous for swimmers to enter the water and for boaters to venture offshore. 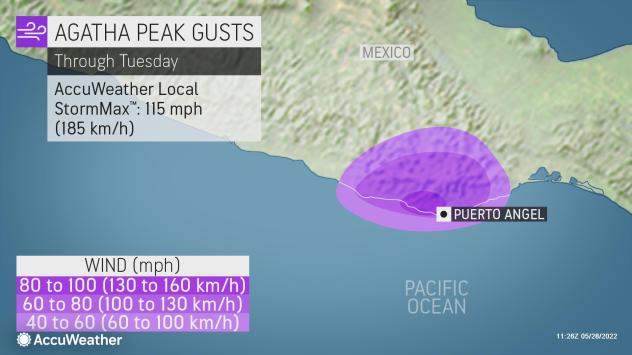 “Flooding rainfall is expected to be one of the biggest impacts across southern Mexico and parts of Central America,” Pydynowski said.

Heavy rain is likely to pour down from Acapulco to Oaxaca and Tehuacán, Mexico, from late Sunday into Tuesday, posing a significant risk to life and property. 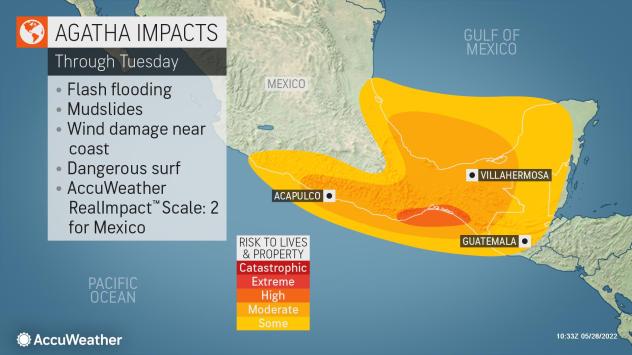 “The heaviest rain will fall across the Mexican states of Oaxaca and Chiapas, causing flash flooding mudslides and road closures,” Pydynowski said. These life-threatening dangers will be heightened in areas of mountainous terrain where steep slopes can give way once the ground becomes extremely saturated.

Rain amounts of 6 inches or more are expected to be widespread across southern Mexico from Sunday through Tuesday. Coastal portions of Oaxaca and Chiapas can expect the highest rain amounts of 8-12 inches. Mountainous areas will be most likely to reach the AccuWeather Local StormMax™ of 28 inches. 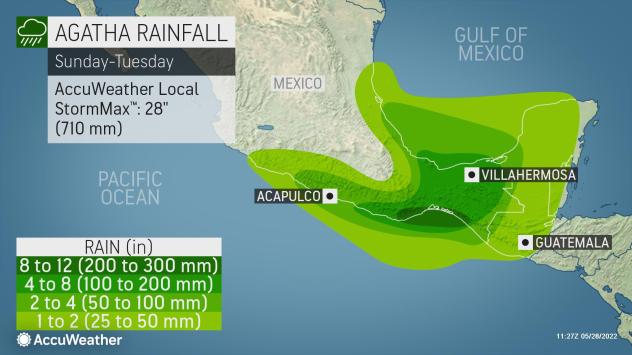 Agatha is a 2 on the AccuWeather RealImpact™ Scale for Hurricanes due to the intense wind gusts and flooding threat in Mexico.

For the 2022 East Pacific tropical season, AccuWeather forecasters are predicting a normal to above-normal hurricane season. Fifteen to 19 named storms are expected to form with the possibility of six to eight of them reaching hurricane force. The normal count of named storms in the basin is about 15 storms, with eight achieving hurricane status.

AccuWeather meteorologists will be closely monitoring the leftover energy from Agatha as it crosses Mexico and enters the Bay of Campeche during the first days of June. Here, it could redevelop into the Atlantic basin’s first named storm.