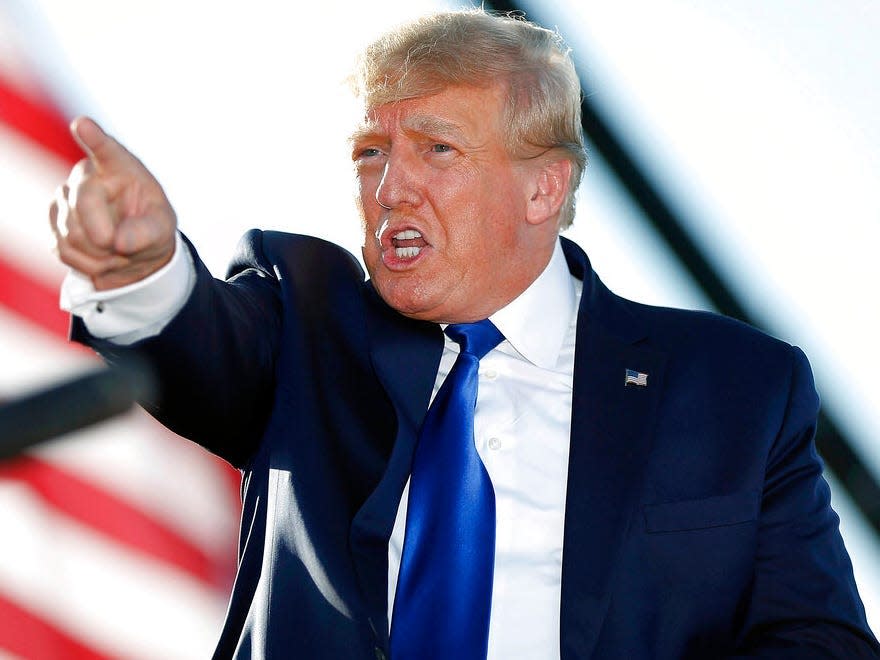 Former President Donald Trump demanded reinstatement as president or “a new Election, immediately” after news that Facebook temporarily limited a controversial story about Hunter Biden’s laptop in users’ news feeds before the 2020 election.

Trump was responding to Facebook, now Meta, CEO Mark Zuckerberg’s comments on Joe Rogan’s podcast that a New York Post story about the laptop “fit the pattern” of polarizing content, including “Russian propaganda,” that the FBI had warned the company about.  The laptop story had several red flags that raised questions about its authenticity and Facebook limited its reach on the site’s news feeds for a few days.

Trump’s statement on Truth Social doubles down on false election fraud claims as some Republicans, the Washington Post has reported, are trying to distance themselves from his personal grievances ahead of the midterm elections in November.

In his statement, Trump wrote in all capital letters that the “FBI BURIED THE HUNTER BIDEN LAPTOP STORY BEFORE THE ELECTION knowing that, if they didn’t, ‘Trump would have easily won the 2020 Presidential Election.’ This is massive FRAUD & ELECTION INTERFERENCE at a level never seen before in our Country.”

Trump continued: “REMEDY: Declare the rightful winner or, and this would be the minimal solution, declare the 2020 Election irreparably compromised and have a new Election, immediately!”

Facebook allowed users to share the story but it showed up less in people’s news feeds, so it was seen less. During Rogan’s program, Zuckerberg said he couldn’t recall if the FBI warned him about the New York Post story specifically, but he thought the story “fit the pattern.”

But Meta later tweeted that “nothing about the Hunter Biden laptop story is new” and that the “FBI shared general warnings about foreign interference — nothing specific about Hunter Biden.”

Trump has been railing against the FBI since agents searched his Mar-a-Lago home earlier this month for classified documents.

Trump won’t be reinstated after losing the election, although QAnon conspiracy theorists spread the idea a year ago. The New York Times’ Maggie Haberman said last year that Trump was telling allies that he thought he’d be reinstated, as well.

The president has not been implicated, CNN reported, but Republicans say they will ramp up their investigations of the Bidens if they win control of the House in the midterm elections.