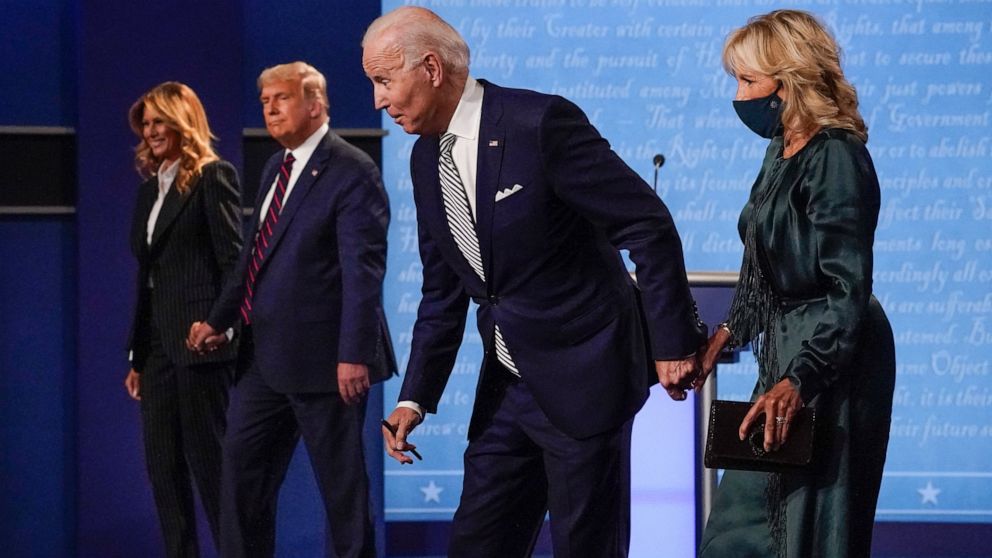 An election year already defined by a cascade of national crises is descending further into uncharted territory, now that President Donald Trump says he’s tested positive for the coronavirus

An election year already defined by a cascade of national crises descended further into chaos Friday with President Donald Trump declaring that he’s tested positive for the coronavirus after consistently playing down the threat.

No one knows exactly what comes next.

At the least, the development settles the focus of the campaign right where Democratic nominee Joe Biden has put his emphasis for months: on Trump’s response to a pandemic that has killed more than 200,000 people in the U.S. And for the short term, it’s grounded Trump in a quarantine, denying him the large public rallies that fuel his campaign.

“From now until we get to the election, attention is going to be back where it should be: on COVID, the president’s response and the impact — and on health care,” said Democratic strategist Antjuan Seawright, a Biden supporter. “This proves our candidate was right all along.”

Karen Finney, another Democratic consultant and top adviser to Hillary Clinton’s 2016 campaign, said the immediate focus should be on the Trumps’ health. But she added the development proves that not even Trump, no matter his talents for dictating headlines and framing events, can control a pandemic.

“It’s a reminder that the American presidency is bigger than any one person, given the reach and depth this news has,” she said, noting that a health scare for a president not only dominates headlines but can rattle financial markets.

Trump tweeted Friday that he’d begin quarantining and recovery. He’s cancelled his weekend itinerary in Wisconsin, one of the three Great Lakes states that he won by less than 1 percentage point in 2016 on his way to the presidency.

Americans have already begun voting in several states, meanwhile, and tens of millions will receive absentee mail-in ballots or be eligible for in-person early voting in the coming weeks.

Biden’s campaign has not publicly confirmed the timing or results of the former vice president’s latest COVID-19 test. Biden was scheduled to travel to Michigan on Friday. Biden’s running mate, Kamala Harris, was slated for a trip to Las Vegas. It was unclear whether those plans might shift given the president’s diagnosis.

The Democratic nominee has been much more cautious in his travel itinerary than Trump, with fewer public events and all of them following social distancing guidelines. Only Thursday did Biden’s campaign announce that it would resume door-to-door canvassing in addition to its phone and digital outreach to voters.

A top Trump adviser did not immediately respond to a request for comment on how the president might adjust his strategy or tactics going forward.

But the president now faces pressure to adjust after declaring many times that the virus would “disappear.” The president has repeatedly ridiculed Biden for his approach. Throughout the spring and summer, when Biden wasn’t traveling regularly, the president said his challenger was “hiding in his basement.” At the rivals’ first debate Tuesday, Trump renewed his mockery over Biden wearing a mask.

“I put a mask on when I think I need it,” Trump said. “I don’t wear masks like him. Every time you see him he’s got a mask. He could be speaking 200 feet away and he shows up with the biggest mask I’ve ever seen.”

Trump and Biden did not shake hands during the debate but stood without masks about 10 feet (3 meters) apart for the 90-minute event.

Both men are in high-risk categories for COVID complications. Trump is 74 years old and clinically obese. Biden is 77 years old.

Should Trump emerge with no visible effects, he could declare a speedy recovery as proof that he’s been right about COVID-19 being overblown. But that still would be at odds both with established science and with what Trump himself has said privately. Recordings by journalist Bob Woodward reveal Trump in early February detailing the “deadly” consequences of coronavirus, contrary to his public dismissiveness.

Seawright argued that any declaration of victory from Trump would appeal only to voters already determined to vote for him.

Despite the gravity of the news, Finney noted that other seismic stories beyond the pandemic are playing out ahead of the Nov. 3 election.

Trump’s Supreme Court nominee, Amy Coney Barrett, continues meetings with senators on Capitol Hill ahead of a fast-track confirmation process that is likely to further inflame political divisions in Congress and across the electorate. Barrett could end up being a decisive vote on election disputes or another constitutional challenge to the 2010 health care law that affects insurance eligibility for millions of Americans. And public demonstrations continue in many U.S. cities as part of a national reckoning on racism following years of police killings of Black Americans.

“The pandemic is top of mind for everyone,” Finney said, “but certainly for Black and brown Americans, so are the issues that have people in the streets peacefully protesting.”

Nagorno-Karabakh: The three-year-old orphaned by war