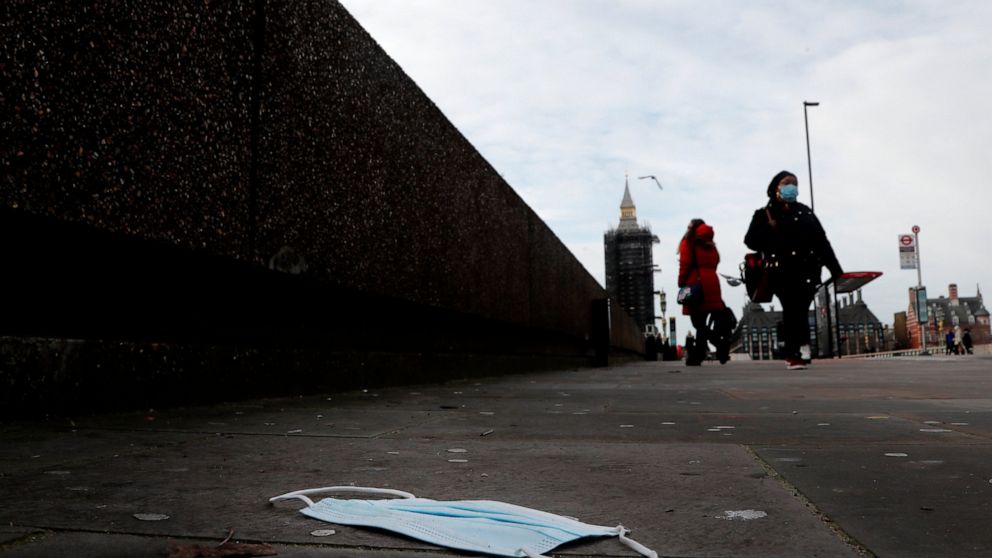 The British government has extended its toughest coronavirus restrictions to more than three-quarters of England’s population, saying a fast-spreading variant of the virus has reached most of the country

LONDON — The British government on Wednesday extended its toughest coronavirus restrictions to more than three-quarters of England’s population, saying a fast-spreading new variant of the virus has reached most of the country.

Health Secretary Matt Hancock said that at midnight the government’s top infection-warning level, Tier 4, would be expanded beyond London and the southeast to cover large swaths of central, northern and southwest England, including the major cities of Manchester and Birmingham. The move will severely curtail New Year’s Eve celebrations in parts of England that are home to 44 million people, or 78% of the population.

In England’s Tier 4, most people are advised to stay home, barred from mixing with the members of other households either indoors or out, nonessential shops are shut and restaurants and bars can only offer takeout.

Hospitals in the worst-hit areas of London and southern England are becoming increasingly overstretched, with ambulances unable to unload patients at some hospitals where all the beds are occupied. There are more people in hospitals with COVID-19 now than at the first peak of the outbreak in April.

Britain has recorded more than 72,500 confirmed coronavirus deaths, the second-highest death toll in Europe after Italy. The country reported a record number of new confirmed cases on Tuesday, more than 53,000, and 50,023 on Wednesday.

The U.K. also reported Wednesday that another 981 people with the coronavirus had died. It’s the highest daily figure reported since April, though it follows a lag in reporting over the Christmas holidays.

Hancock said Wednesday’s authorization of a second vaccine for use in the U.K. was good news, but “sharply rising cases and the hospitalizations that follow demonstrate the need to act where the virus is spreading.”

He told lawmakers in the House of Commons that the medicines regulator’s approval of the vaccine made by British pharmaceutical company AstraZeneca and Oxford University “brings forward the day on which we can lift the restrictions,”

“But…we must act to suppress the virus now, especially as the new variant makes the time between now and then even more difficult.”

In addition to the wider restrictions, the government delayed the return to school after the Christmas break for millions of students. Education Secretary Gavin Williamson said secondary schools in England would not resume in-person teaching until Jan. 11, though most primary schools would go back on Monday as planned.

Prime Minister Boris Johnson said the Oxford-AstraZeneca vaccine and another already in use developed by U.S. drugmaker Pfizer and Germany company BioNTech meant “there are plenty of reasons for people to be optimistic about the spring.”

However, Johnson said, “people should not in any way think that this is over.”

Bidens will be greeted to White House by former Trump hotel...

Boy Killed By Father After Vaccination Dispute in Heartbreaking Murder-Suicide in...