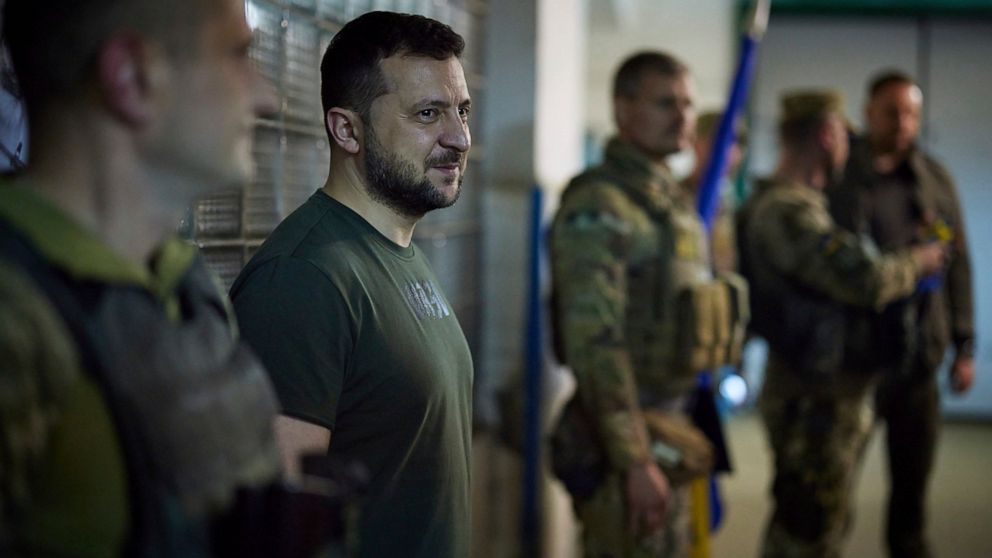 KYIV, Ukraine — Ukraine’s president says Russian troops intend to capture Zaporizhzhia, a large city in the country’s southeast, which would allow the Russian military to advance closer to the center of the country.

Volodymyr Zelenskyy told a news conference on Monday that peace talks with Russia stood at “level zero,” and in the meantime “the most threatening situation” has developed in the Zaporizhzhia region, parts of which have already been taken by Russia.

“The enemy wants to … occupy the city of Zaporizhzhia,” Zelenskyy said.

In the south of Ukraine, Russia has already seized the large Ukrainian cities of Kherson and Mariupol. The Zaporizhzhia region, with the population of 1.6 million, is one of the biggest industrial hubs of Ukraine’s southeast. The city itself has 722,000 people.

Zelenskyy also said Ukrainian troops are still fighting in the eastern part of the country known as the Donbas. In the Luhansk region, which is part of the Donbas, the Ukrainian resistance continues in Sievierodonetsk, one of the two key cities in the region still not in Russia’s hands, he said.

“There are more of them, they are more powerful, but we have every chance to fight on this direction,” Zelenskyy said.

In the northern Kharkiv region, the Ukrainian army “step by step de-occupies our lands” from Russian invaders, Zelenskyy said.

In the meantime, Kyiv is hoping to create secure corridors that would allow its ships to export grain that has been blocked inside the countries by the fighting. Zelenskyy said Ukraine is in talks with countries like Turkey and the U.K. about security guaranties for Ukrainian ships carrying much needed grain for export. Russia’s invasion of Ukraine has disrupted food supplies for many nations in the world, causing prices to soar.

“It is important for us that there is a security corridor … that the fleet of this or that country ensures the shipping of the grain,” Zelenskyy said. “If now we have 22-25 million tons blocked there, in the fall we might have 75 (million tons).”

“What are we going to do? he asked. ”That’s why we can’t do without the ports.”

His government has previously accused Russia of stealing tons of grain from territory it has occupied in Ukraine.

The issue of blocked grain will be on the agenda Wednesday during Russian Foreign Minister Sergey Lavrov’s visit to Turkey. Ankara is involved in efforts by the United Nations to reach an agreement for shipping Ukrainian grain out amid an escalating global food crisis.

Zelensky said Kyiv has not been invited to the talks, possibly because Turkey wants to get security guarantees for its ships from Russia first.

He explained that Ukraine can’t export large shipments of grain via railways because of long delivery times, even though Kyiv has been in talks with Poland and the Baltic nations. Exporting grain through the neighboring territory of Russia’s ally Belarus is also not an option, he said.

Follow all AP stories on the war in Ukraine at https://apnews.com/hub/russia-ukraine.