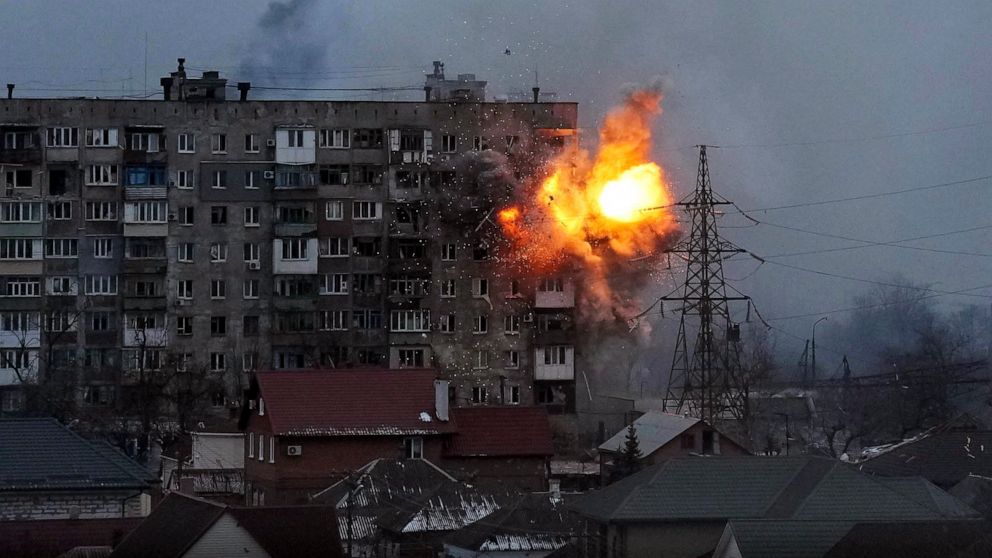 LVIV, Ukraine — Unbroken by a Russian blockade and relentless bombardment, the key port of Mariupol is still holding out, a symbol of staunch Ukrainian resistance that has thwarted the Kremlin’s invasion plans.

More than six weeks after the Russian siege began, Ukrainian troops are continuing to fight the vastly superior Russian forces in ferocious battles amid the ruins of what once was a bustling city on the Sea of Azov coast.

The Ukrainians’ fight against all odds has scuttled Moscow’s designs, tying up significant Russian forces and delaying the start of a planned Russian offensive in eastern Ukraine’s industrial heartland, Donbas. The Kremlin hopes that an attack in the east could reverse the battlefield fortunes for Russia after a humiliating failure of its attempt to quickly storm the Ukrainian capital, Kyiv.

Mariupol has been a key objective for Russia since the start of its invasion on Feb. 24. Capturing the city would allow Moscow to establish a land corridor to Ukraine’s Crimean Peninsula that Russia annexed in 2014 and deprive Ukraine of a major port and prized industrial assets.

The giant Azovstal steel mill and other industrial plants have been heavily damaged by the ferocious Russian bombardment that has flattened much of Mariupol, indiscriminately hitting homes, hospitals and other public buildings and killing thousands.

The victims include about 300 people killed in last month’s Russian airstrike on the Mariupol Drama Theater that was being used as a shelter and had the word “CHILDREN” printed in Russian in huge white letters on the pavement outside to ward off aerial attack.

Mariupol Mayor Vadym Boychenko told The Associated Press that at least 21,000 people were killed in Mariupol with bodies “carpeted through the streets.” He said that the Russians deployed mobile cremation equipment to Mariupol to methodically dispose of the victims’ bodies in order to hide the evidence of the massacre and prevent international organizations from documenting “the horror the Russian army is responsible for.”

The discovery of hundreds of bodies of civilians apparently executed by Russian forces in Kyiv’s suburbs after the Russian retreat from the area has fueled global outrage and accusations from Ukrainians and the West that Russia is committing war crimes in Ukraine.

Moscow has deployed fighters from Chechnya, known for their ferocity, to wage street battles in Mariupol. Chechnya’s Moscow-backed leader, Ramzan Kadyrov, has repeatedly boasted on his messaging app channel about defeating Ukrainians in Mariupol, but the fight has continued.

Boychenko said that several Ukrainian units are still fighting the Russians in Mariupol, including the 36th Marine Brigade, the Azov Regiment, some Interior Ministry troops and border guards.

The Azov Regiment, a seasoned volunteer force that is widely considered one of the country’s most capable units, is defending the mammoth Azovstal steel plant that covers an area of nearly 11 square kilometers (over 4.2 square miles). It has taken advantage of the plant’s sprawling network of concrete buildings and underground facilities to repel continuous Russian attacks.

The 36th Marine Brigade was maintaining defensive positions at the Azovmash and Zavod Ilyicha factories until it ran out of supplies and ammunition and made a desperate attempt to break through the Russian blockade earlier this week.

In a post on the brigade’s Facebook page, one of its officers described the unit’s heroic resistance, saying that “for more than a month, the marines have been fighting without replenishing amunition, food and water supplies.” “The wounded accounted for nearly a half of the brigade’s strength, but those who still had their limbs and were capable of walking reported back to duty,” the post said.

Boychenko said that some of the marines managed to join the Azov regiment, while others were captured by the Russians. He didn’t give any numbers.

The Russian military said Thursday that a total of 1,160 Ukrainian marines surrendered this week, a claim that couldn’t be independently verified.

As the Ukrainian troops continue to offer fierce resistance in Mariupol, fears have grown that the exasperated Russians could resort to chemical weapons to deal with the remaining pockets of resistance at the Azovstal plant and other areas of the city.

Eduard Basurin, a Russia-allied separatist official in eastern Ukraine, appeared to call for that Monday, telling Russian state TV that the Russia-backed forces should block all the exits out of the factory and then “use chemical troops to smoke them out of there.” He later said that no chemical weapons were used.

The Azov Regiment claimed Monday, without providing evidence, that a drone had dropped a poisonous substance on its positions but inflicted no serious injuries. A Ukrainian defense official said the attack possibly involved phosphorus munitions.

Ukrainian authorities have said that the Russians have blocked humanitarian convoys from reaching Mariupol, keeping it without food, water and power since the siege started. The Russian troops have turned back buses sent to evacuate residents, but about 150,000 have been able to flee the city in their own vehicles.

Boychenko said that at least 33,500, and, possibly, up to 50,000 Mariupol residents have been taken to “filtration camps” in the separatist-controlled east before being forcibly sent to distant, economically depressed areas in Russia.

Mariupol has seen communications cut since the start of the siege, and as the Russians moved to capture sections of the city they launched radio broadcasts to brainwash the population.

“They unleashed propaganda, telling people that Kyiv and other cities have been captured and they have been abandoned,” Boychenko said.

The continuing fighting in Mariupol has forced the Russian military to keep a significant number of troops in the city, delaying the start of the planned new offensive in eastern Ukraine.

“As long as the street fighting is going on, Russia can’t remove troops from Mariupol and deploy them to other areas, including Donbas,” Oleh Zhdanov, an independent military expert, told the AP.

“The Ukrainian troops in Mariupol are still fulfilling their main task by diverting the Russian forces from other areas. Mariupol remains a major symbol of the Ukrainian resistance.”