He made the comments during a visit to Mariupol to meet with troops.

“The situation on the border is under control. It hasn’t changed,” he said, according to a translation by Russia’s state-run Tass news agency. “We are seeing a slight rotation of the Russian troops, but we aren’t seeing a withdrawal.”

U.S. Secretary of State Antony Blinken also said Wednesday that the United States has not yet seen Russian military forces pulling back from Ukraine’s borders.

“Unfortunately, there’s a difference between what Russia says and what it does, and what we’re seeing is no meaningful pullback,” Blinken said in an interview on ABC’s Good Morning America.

During another interview on MSNBC’s Morning Joe, Blinken said Russian troops were massed in a threatening way along Ukraine’s borders.

President Joe Biden said Tuesday afternoon that a Russian attack is still “very much a possibility,” but he said he hopes diplomatic efforts will prevail.

The Russian Defense Ministry has said some troops were pulling back after finishing military training exercises. But the United States and its NATO allies say they are not seeing signs of a pullback.

NATO Secretary-General Jens Stoltenberg said Wednesday that despite claims to the contrary, Russia is building up troop numbers along its border with Ukraine.

Speaking before a meeting of NATO defense ministers in Brussels, Stoltenberg said Moscow has shown no signs of a pullback — and, in fact, appears to to be adding to its forces.

Russia’s Defense Ministry said Tuesday that some of the soldiers who’d been participating in drills in the area have begun to return to their bases.

“So far we have not seen any de-escalation on the ground,” Stoltenberg said, according to The Guardian.

“On the contrary, it appears that Russia continues the military buildup. We are, of course, monitoring very closely what Russia does in and around Ukraine.”

Despite the apparent contradiction, Stoltenberg said that NATO anticipates dialogue between Russia and Europe will continue to avoid an invasion. 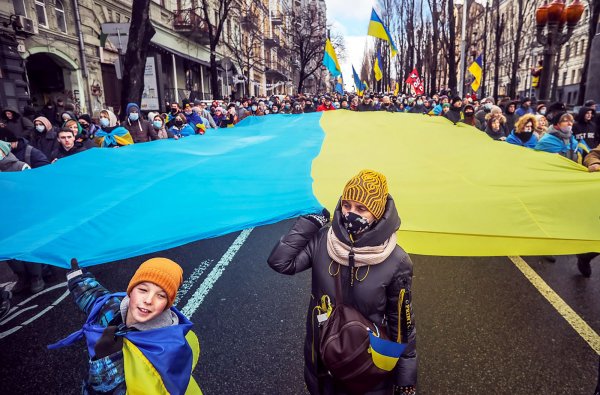 Demonstrators march carrying the national flag during a rally in Kiev, Ukraine, on Saturday to show unity amid rising concerns about an imminent Russian invasion. Photo by Oleksandr Khomenko/UPI
Advertisement

“What we see is that they have increased the number of troops, and more troops are on their way, and so, so far, no de-escalation,” he added. “But of course, we hear all the messages about diplomacy, and we are ready to engage in diplomatic efforts with Russia.”

Stoltenberg also said he didn’t know how many troops Russia has on the Ukrainian border, but noted that he believes they have enough to conduct a “full-fledged” invasion — Biden echoed in an address on Tuesday.

Moscow’s Defense Ministry released a video Tuesday that showed armored vehicles moving across a bridge away from Crimea, which Russia forcibly annexed from Ukraine in 2014.

Ukrainian officials said earlier this week that Russia may launch its invasion on Wednesday — a notion that Moscow dismissed. Russian officials have said that there are no plans to invade Ukraine.

Moscow has expressed concern about Ukraine’s aspiration to join NATO, and Putin says Russia’s security concerns aren’t being taken seriously by the West.