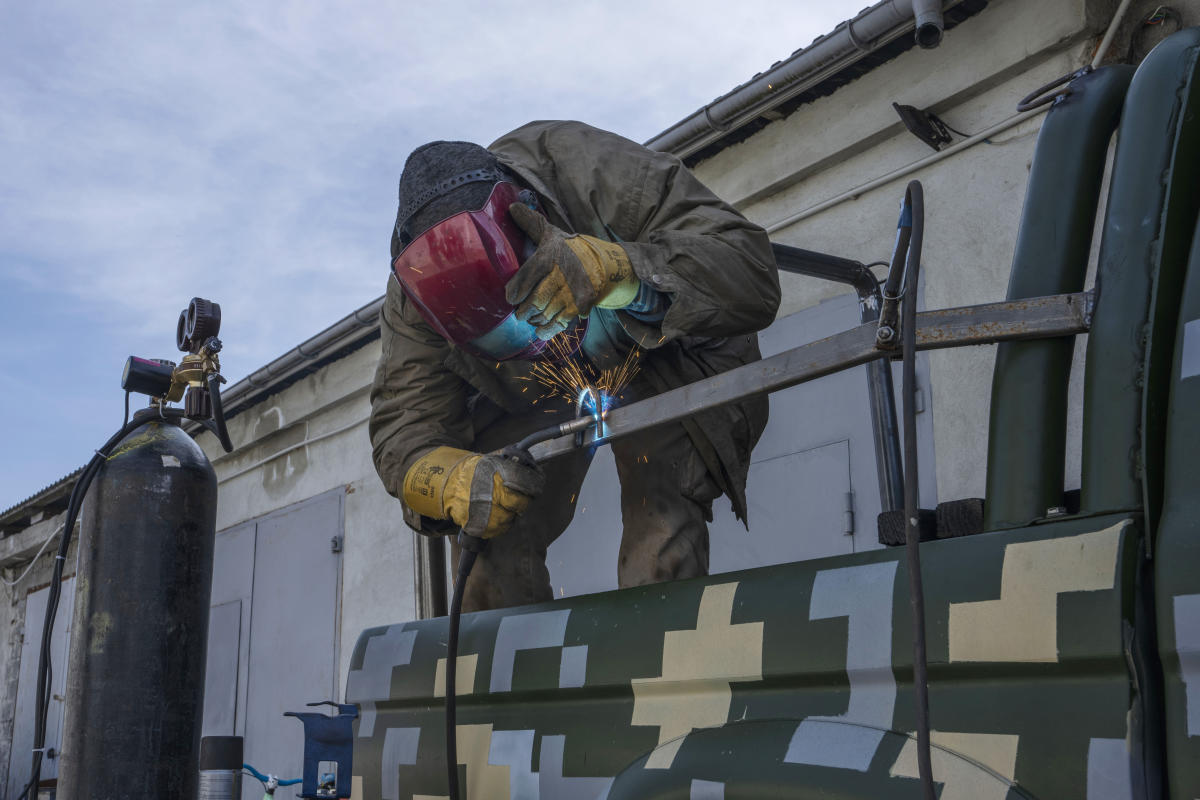 In a welding shop in Ukraine’s western city of Lviv, workers were adding steel plates to a donated pickup truck so a volunteer could drive it to the front.

“Our victory depends on us,” said Ostap Datsenko, a welder who is part of a huge volunteer effort playing a role in Ukraine’s resistance, with support from the diaspora.

But he hadn’t expected to see so much of the war, or its shrapnel, so soon.

He had been standing on the truck hurrying to finish the job before sunset Saturday when he heard a noise, looked up and saw an object whizzing through the air.

“It was pretty large, but I’ve never seen rockets before,” he said. “Then I heard a huge explosion.”

The Russian airstrike hit a factory connected to the military, and the blast sent Datsenko tumbling. Dazed, he hurried into the garage’s makeshift bunker in the grease pit.

The following day, he was back at work for the finishing touches on the truck before it’s driven on Monday to eastern Ukraine, along with three other vehicles.

The truck’s camouflage paint job was complete. The welders put bars in the back to help support a machine gun.

The 31-year-old Datsenko, his clothes streaked with oil, said he was ready like all Ukrainian men to be called up to fight. But he had no combat experience, meaning his time is yet to come.

Ukraine’s military appears to have fought Russia’s much larger army into a stalemate on some fronts, which has surprised many observers. One of Ukraine’s weapons is a parallel army of volunteers who are busy mobilizing funding and supplies ranging from body armor to cigarettes. Others make the military connections.

In Lviv, which had been relatively far from the war until the airstrikes on Saturday, the welding shop looked for ways to help. It started off making “hedgehogs,” or the metal barriers placed at checkpoints and around some sensitive facilities. Then they heard the call for cars.

“Any vehicles are very much in demand on the front line” by commanders, said Artem Pastushyna, a 27-year-old welder with metal nuts glinting in his earlobes.

Only a small number of the vehicles have been adapted with steel plates and camouflage, he said. The need is too big and there’s little time.

“Many cars from Europe are driven directly to the front line,” Pastushnya said.

The truck was the first vehicle that the welding shop has adapted, he said, and he hopes they’ll do many more.

Until then, the welding shop is paying new attention to its grease pit after Saturday’s airstrikes. They had expected an attack sometime but not one so big, Datsenko said.

In the pit-turned-bunker, accessed by a wooden ladder, an empty pizza box indicated that the workers had spent more time there than usual.

“Until yesterday, it was only a basement,” Datsenko said. “Now we realize it would be wise to have more stuff there.”