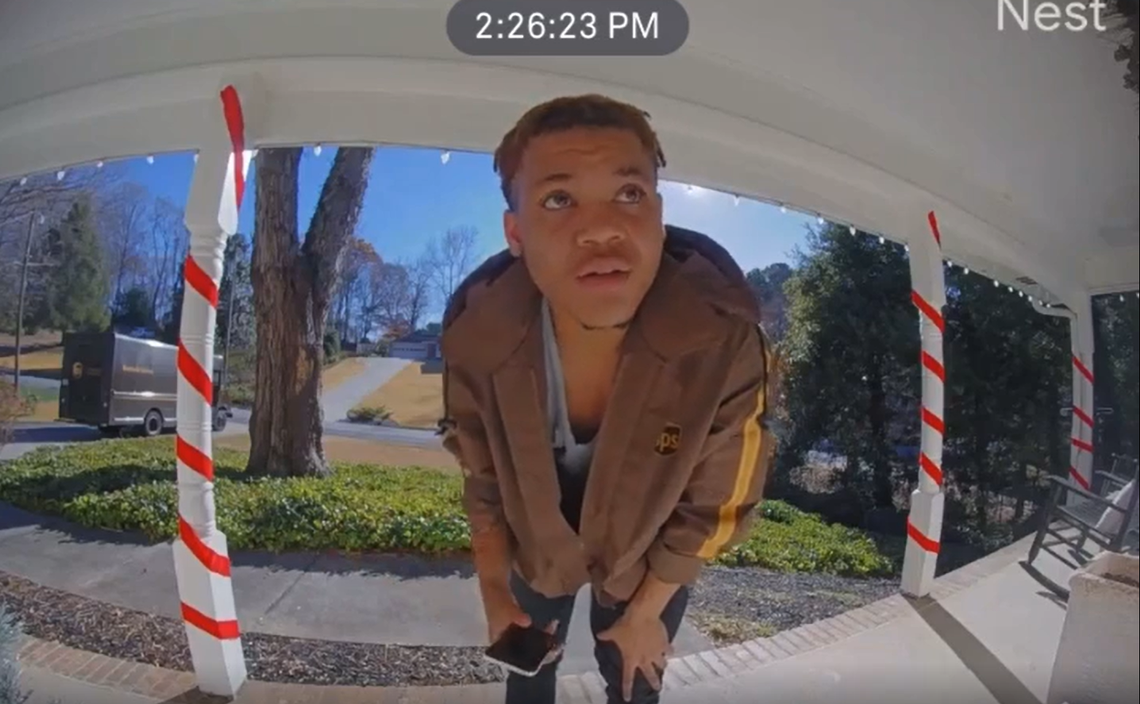 It started with an unassuming package in Roswell, GA.

The UPS delivery driver who dropped it off, Dallen Harrell, noticed a sign in the front of the house he dropped it off at. It was an ‘It’s a boy’ sign, with a large stork to celebrate a newborn son, he told WSB-TV.

Harrell had recently become a parent, too.

He left a brief message on the family’s Nest Security camera system on the porch to wish them well since they were celebrating a new family member.

“If this is the ‘it’s a boy’ house…. I hope all is going well with your newborn. I had a child around the same time you guys did and I just hope that everything is going good, God bless and happy holidays” Harrell said into the camera as he dropped off the package.

Little did he know, it was the exact kind of message that the new mother, Jessica Kitchel, needed to hear, she told the Washington Post. Kitchel was recovering from a C-section after delivering her son, and the kindness moved her, she said.

“It is really easy to focus on what isn’t going right right now with staffing shortages but it was good to be reminded that there are still great people working hard every day for us!” KitcheI wrote in an Instagram post. “I really wish I knew his name but I hope he comes back and if he does there will be diapers waiting for him.”

It wasn’t long before she was able to track down the name of the driver with the help of UPS, according to WSBTV. When they spoke on the phone, Harrell shared that he also had a newborn and told Kitchel he wanted to share some parent-to-parent solidarity, WSB reported.

“Everyone please meet Dallen Harrell, our @ups angel. It’s because of all of you who shared my video that I was able to locate him. He’s incredibly sweet!” Kitchel posted in a following Instagram message. “Dallen has an almost 3 month old son, Deveraux. I know so many people were as blessed as I was by his message.”

Kitchel didn’t just share Harrell’s kind words and face online, though. She wanted to pay back his kindness. She linked his baby registry and Target wish list for his newborn to her Instagram, so that her followers could order him items for his family.

“Please help me give this incredible angel a Christmas him and his family won’t forget!” she asked her followers online.

Her request was answered. Kitchel’s next post was a truckload of boxes from another delivery company, FedEx. Strangers had been sending Harrell boxes, and over half the load in the photo was for his family, the delivery driver told Kitchel.

“Do for one what you wish you could do for everyone,” she wrote in her Instagram caption, quoting Public Speaker Andy Stanley.

When Harrell returned to deliver some more packages to Kitchel’s home five days after the first delivery, she had filled a box with diapers, wipes and a giraffe on the front porch for him and his family, WSB reported. Harrell was able to meet the whole family when he stopped by, and take some friendly family photos with Kitchel.

According to WSB, Kitchell and Harrell plan to introduce their two sons after the holidays.

Christmas is the deadliest time of the year for dogs. Here’s why.

Police searching for a man who broke into Florida home and stole Christmas, cops say