Home World US added 678,000 jobs in February in sign of economic health 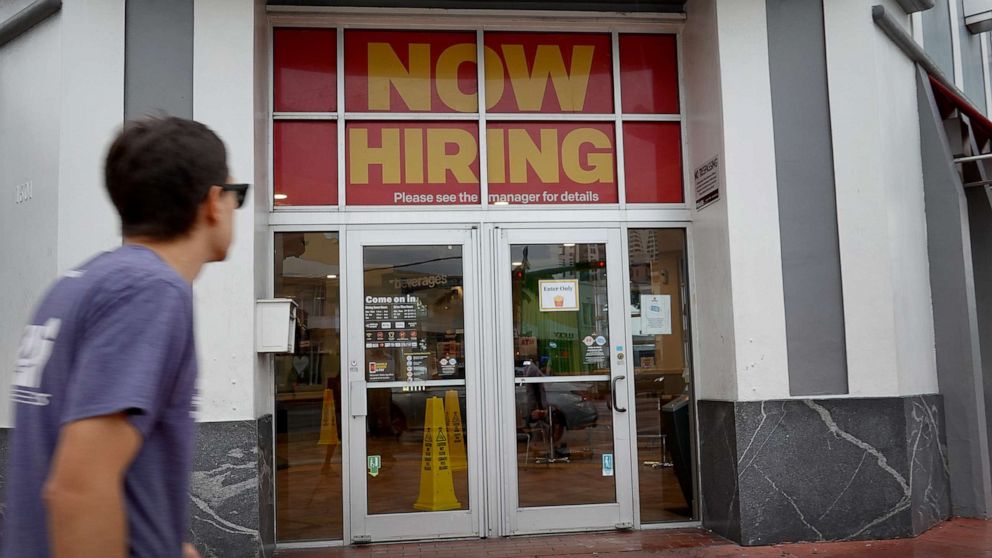 WASHINGTON — U.S. businesses stepped up their hiring last month as the omicron faded and more Americans ventured out to spend at restaurants, shops, and hotels despite surging inflation.

Employers added 678,000 jobs in February, the largest monthly total since July, the Labor Department reported Friday. The unemployment rate dropped to 3.8%, from 4% in January, extending a sharp decline in joblessness to its lowest level since before the pandemic erupted two years ago.

Friday’s hiring figures were collected before Russia’s invasion of Ukraine, which has sent oil prices jumping and has heightened risks and uncertainties for economies in Europe and the rest of the world.

Yet the February hiring data suggest that two years after COVID-19 sparked a nationwide shutdown and 22 million job losses, the disease is losing its grip on America’s economy. More people are taking jobs or searching for work — a trend that, if it endures, will help ease the labor shortages that have bedeviled employers for the past year.

In addition, fewer people are now working remotely because of the disease. A continuing flow of people back to offices could boost employment in urban downtowns. And the number of Americans who are delaying job hunts for fear of the disease fell sharply from January, when omicron was raging, to February.

“All signs are that the pandemic is easing its hold on jobs and the economy,” said Jane Oates, president of WorkingNation and a former Labor Department official. “Very strong numbers in very uncertain times.”

Recent economic data show that growth has stayed healthy as new COVID infections have plummeted since late January. Consumer spending has risen, spurred by higher wages and savings. Restaurant traffic has regained pre-pandemic levels, hotel reservations are up and far more Americans are flying than at the height of omicron.

Still, escalating costs for gasoline, wheat and metals such as aluminum, which are exported by both Ukraine and Russia, will likely accelerate inflation in the coming months. Higher prices and anxieties surrounding the war could slow hiring and growth later this year, though economists expect the consequences to be more severe in Europe than in the United States.

Inflation has already reached its highest level since 1982, with price spikes especially high for such necessities as food, gasoline and rent. In response, the Federal Reserve is set to raise interest rates several times this year beginning later this month. Those increases will eventually mean higher borrowing rates for consumers and businesses, including for homes, autos and credit cards.

Chair Jerome Powell said this week he plans to propose that the Fed raise its benchmark short-term rate by a quarter-point when it meets in about two weeks. Powell has acknowledged that high inflation has proved more persistent and has spread more broadly than he and many economists had expected.

The strong hiring in February occurred across most of the economy, with restaurants, bars and hotels adding 79,000 jobs, construction 60,000 and transportation and warehousing 48,000. Though the economy still has 2.1 million fewer jobs than it did before the pandemic struck, the gap is closely fast.

A survey by The Associated Press-NORC Center for Public Affairs Research found that Americans are now much less worried about COVID than they were in December and January. Mask mandates and other restrictions are ending.

As mask mandates have ended and omicron cases have declined, customer visits have more than doubled at p.volve, an online fitness company that provides at-home workouts and has three gyms in New York, Los Angeles and Chicago, said Julie Cartwright, the company’s president.

The company, which employs about 75, has four job openings in data analysis, engineering and marketing. The vast majority of its customers do the company’s proprietary workouts at home. Over the past four months, Cartwright has hired 15 people, 10 of whom replaced workers who had quit. Quitting has reached record levels nationally as employers in need of hires have poached workers from other companies.

In response, Cartwright said, p.volve has provided pay raises and more leadership opportunities to try to retain its employees. The company is based in New York City but has also hired remotely since the pandemic hit, significantly expanding its talent pool.

“That’s a massive advantage, now that we can hire really anyone, anywhere,” she said.

After months of concerns about labor shortages holding back businesses, more Americans started job searches in February for the second straight month. The proportion of Americans either working or looking for a job rose to 62.3%, up from 61.5% a year ago, though it remains below the pre-pandemic level of 63.4%.

The number of people who said they avoided job hunting because they were concerned about COVID fell to 1.2 million in February, down 600,000 from January, when omicron was raging.

Gregory Daco, chief economist at tax advisory firm EY-Parthenon, suggested that the increase in the number of Americans looking for a job last month was “the most important number” in the report.

“That will reduce wage growth pressures and put us on a more sustainable trajectory for the economy,” Daco said.

Among the recent new job seekers was Ryan Gerard, who had quit a sales job last July because he felt burned out by the emails and texts he received at all hours and because his employer wasn’t fully comfortable with remote work during COVID.

Gerard, 30, who lives near Cleveland, took a break for several months, then began looking for work again in November. In January, he landed a sales and account management job at a public relations firm, Sixth City Communications. Gerard said he never worried that he wouldn’t be able to find work. And his current position, he said, provides a much better work-life balance.

“I wanted to reassess where I was,” he said. “There was no shortage of jobs. I got interviews at a variety of places.”