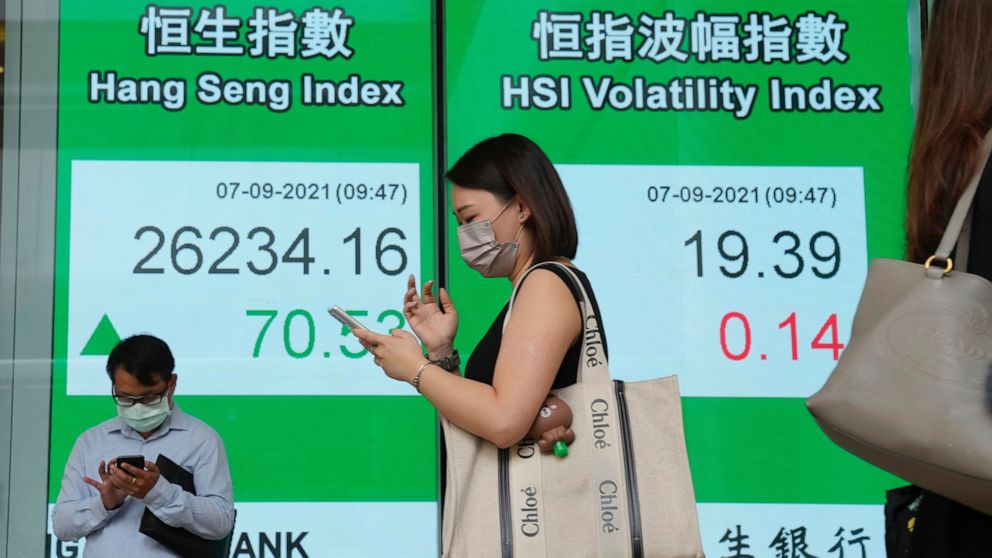 Stocks are off to a sluggish start on Wall Street Tuesday as traders return from the Labor Day weekend in the U.S. Industrial and health care stocks were the biggest drag on the market in the early going

By The Associated Press

BEIJING — Stocks are off to a sluggish start on Wall Street Tuesday as traders return from the Labor Day weekend in the U.S. Industrial and health care stocks were the biggest drag on the market in the early going. The S&P 500 was off 0.2%. Boeing fell 1.8% and Amgen lost 1.7%. Small-company stocks rose, and the Nasdaq was holding at about breakeven with some help from Tesla and several big technology stocks. The Nasdaq set it latest record high on Friday. European markets were lower and Asian markets closed mixed. The yield on the 10-year Treasury note rose to 1.37%.

BEIJING (AP) — European stocks opened lower Tuesday while Asian markets gained after China reported stronger August exports as investors awaited updates on when European and other central banks might wound down their stimulus.

Wall Street futures were higher as U.S. markets prepared to reopen after a three-day weekend.

Investors looked ahead to Thursday’s meeting of the European Central Bank, which is expected to debate when to withdraw bond purchases and other stimulus for economies that use the euro.

“Attention will be on whether the policymakers start to taper asset purchases, especially in light of recent stronger-than-expected inflation data,” Anderson Alves of ActivTrades said in a report.

On Tuesday, Australia’s central bank said weekly bond purchases that pump money into the financial system will be reduced by 20% but that level will be extended through at least mid-February instead of November, as previously planned. The bank said it expects economic output to decline this quarter but said that should be temporary.

The Bank of Canada issues its policy update Wednesday. Central bankers in Poland, Malaysia and Russia also are to meet.

On Wall Street, futures for the benchmark S&P 500 index and the Dow Jones Industrial Average were up less than 0.1%.

On Friday, the S&P 500 fell 0.1% on disappointing August hiring data but was near a record high. The Dow fell 0.2% while the Nasdaq composite rose 0.2% to a record.

In Asia, the Shanghai Composite Index rose 1.5% to 3,676.59 after August exports grew faster than expected.

Customs data showed Chinese export growth accelerated to 25.6% over a year earlier from July’s 19.3%, beating expectations of about 17%. Import growth rose to 33.1% from the previous month’s 28.1%.

“Asian equities are breathing a sigh of relief, and oil prices have moved higher,” Jeffrey Halley of Oanda said in a report.

Investors have been encouraged by the spread of coronavirus vaccinations and stronger U.S. corporate profits, though hopes are tempered by rising infections due to the virus’s more contagious delta variant.

Traders also appear to hope weak job markets in the United States and some other countries might prompt central bankers to postpone the withdrawal of stimulus that has pushed up stock prices.