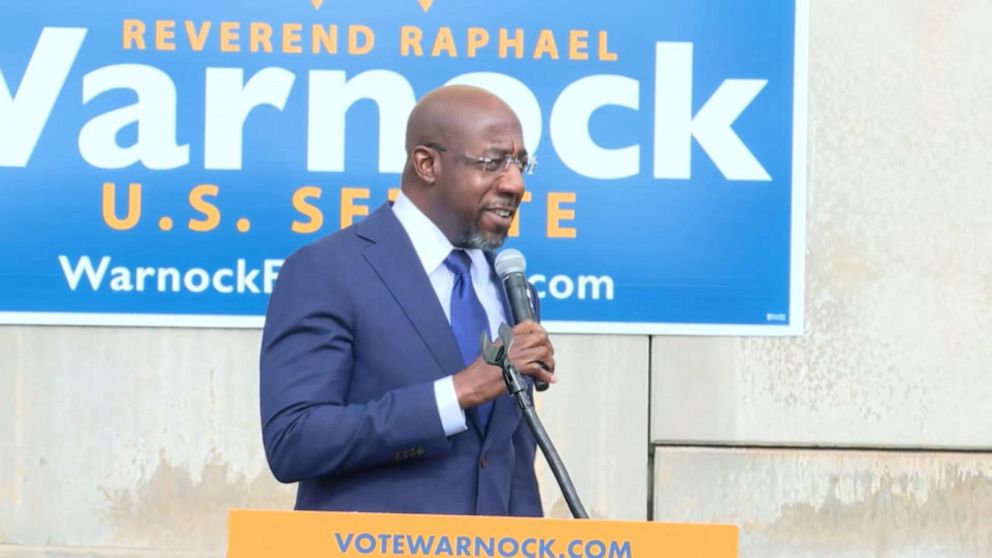 Transcript for Votes being counted in Georgia runoffs

Republican David perdue fighting for a second term, challenged by Democrat Jon ossoff and Republican Kelly Loeffler, who was appointed to her seat, fending off democratic challenger reverend Raphael Warnock. Democrats need both of their candidates to win. They will have a tie in the senate and vice President-Elect kamala Harris would cast any tie-breaking votes. Republicans need to win just one of these two races to keep control and a check on the Biden presidency. President-Elect Joe Biden campaigning in Georgia. Democrats with an 11th hour appeal, telling voters that the handling of this pandemic, including those $2,000 stimulus checks, depends on the outcome of this election. President trump campaigning for the Republicans, too. It comes amid news the president pressured Georgia’s secretary of state to find 11,000 votes to take Biden’s Georgia victory away from him. The counting will soon begin tonight and Georgia voters know they hold significant power on this day. Not only for the future of their state, but control of the senate. ABC’s Steve osunsami leads us off from Atlanta again tonight. Reporter: In Georgia tonight, they are just minutes away from starting to count the votes, and ending the national focus over this one runoff election. The future of the country is on the ballot here in Georgia today. Y’all sound like you’re ready to win an election! Reporter: It is super clear to voters here, who were lined up before the polls even opened, that their decision is bigger than Georgia. That the results will decide if Republicans keep control of the U.S. Senate, allowing them to put a thorn in the President-Elect’s agenda. At the 11th hour, Joe Biden and the Democrats are saying that what happens here today could determine if Americans get those $2,000 stimulus checks. What do you think about this election? It’s a lot. My phone has been vibrating with calls. Have you voted? Do you have a voting plan? Have you told three friends to vote? Reporter: It’s intense. You think that the two Republicans can win? I hope so. We’ll see. I hope democracy does what it does and the people of Georgia get to decide what’s best. Reporter: Democrat Jon ossoff, who’s hoping to take the seat of Republican David perdue, was out late trying to get more of his supporters to the polls. Georgia voters have never had more power than you have today. That’s the reason the whole world is watching us in Georgia. Reporter: A constant noisemaker in this election is the president of the united States, who held a rally for the two Republicans Monday night. After weeks of saying the November election in Georgia was rigged, he was here telling supporters to go out and vote anyway. Senator Kelly Loeffler, who’s hoping to defeat Democrat Raphael Warnock, and is trying to please the president and his supporters, announced she’ll join the group of senators trying to fight the election I will object to the electoral college vote. That’s right. That’s right. Reporter: All of this has put election officials here, who are all Republicans, in a tough spot, as they try to convince their voters that this election was safe and secure. The secretary wants me to make clear that everybody’s vote is going to count. And they’ll be counting those votes right into the night. Let’s get to Steve osunsami. He’s been covering this race from the start. And Steve, I know you’ve been talking to so many voters all day today and it was not lost on them just how important, how powerful their vote is today. Reporter: That’s right, David. And voters have been reminded of this every day for the past two months in their mailboxes, on their phones. One voter told me that it felt like she was voting today on the direction this country is heading. Election officials tonight report few issues here. David? And just remember, for those Georgia voters, they were getting calls and texts for the months with the presidential election and then the runoffs. They’ll be glad for the break. Steve, thank you. ABC news live will have coverage beginning at 7:00 as the polls close. And then, on the network here in prime time. George and our power house political team, 10:30 P.M. Eastern right here.