Nov. 24 (UPI) — The supply of clean drinking water in the Ukrainian capital of Kyiv was restored on Thursday but is not yet at total capacity after a series of Russian missile attacks, officials said.

Civilian infrastructure in the capital and other major cities around the country were targeted a day earlier in a widespread Russian missile attack — the latest in what Ukraine calls deliberate attacks on everyday Ukrainians ahead of the usually bitter winter season.

Russian missiles badly damaged electrical and water infrastructure throughout the Kyiv region, leaving it without electricity and water.

“Water supply has been restored in all districts of the capital,” Kyiv Mayor Vitalii Klitschko said. “But it will take some time for the water supply system to work at full capacity.”

Klitschko followed up by asking Kyiv residents to “stock up on water” in the meantime as municipal crews worked to “return water to the homes of Kyiv residents.”

Kyiv officials said Thursday that two-thirds of the capital city did not electricity and the lack of power throughout the country has made emergency blackouts unnecessary.

Dmitry Peskov, the longtime spokesman for Russian President Vladimir Putin and the Kremlin, said Russia had not targeted any “social” infrastructure and that Ukraine could end hostilities by agreeing to Moscow’s concerns.

“There have been no strikes on social facilities and there are none,” Peskov said Thursday. “And as for targets related to the military potential — directly or indirectly — they are to be attacked.

“Eight energy facilities were hit yesterday,” he said. “Unfortunately, there is confirmed information about 10 dead and about 50 wounded civilians.” 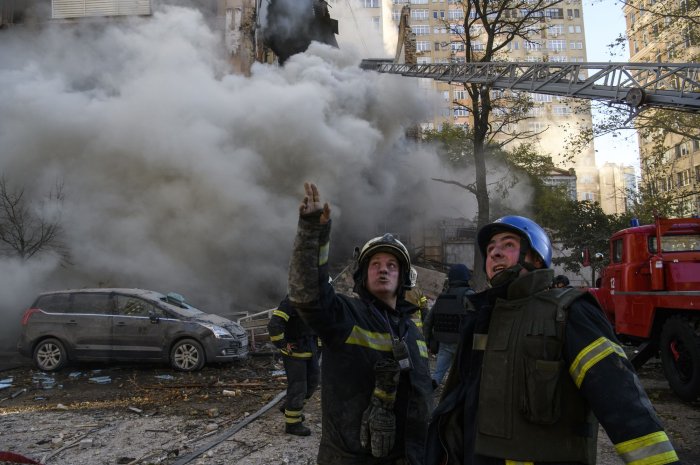 Firefighters conduct work while smoke rises from a building after it was attacked by Russian drones in Kyiv, Ukraine, on October 17, 2022. Photo by Vladyslav Musiienko/UPI | License Photo