Home World ‘We all went flying,’ Kentucky family says after tornado sucked them out... 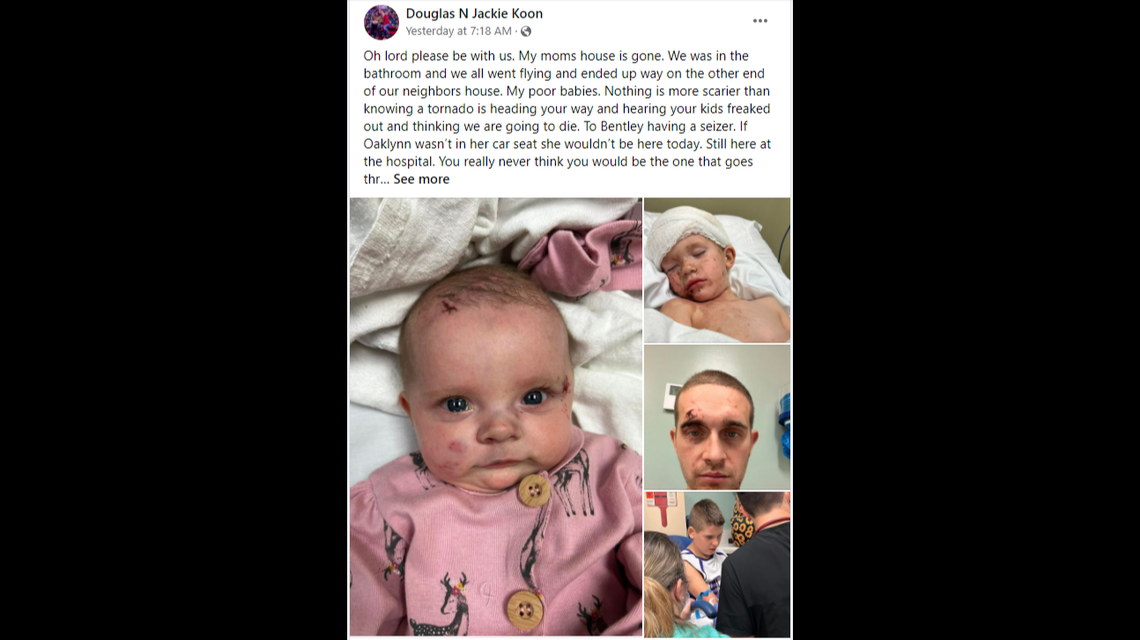 A Kentucky family was left shaken, bloodied and bruised, but alive after a tornado ripped them from a Dawson Springs home and sent them flying.

As tornadoes touched down across western Kentucky over the weekend, Jackie Koon, her husband, Doug, and their three children took shelter at her mother’s house, she said in a Facebook post.

The devastating series of tornadoes between Dec. 10 and 11 killed at least 80 people, the Lexington Herald-Leader reported. That number is expected to reach 100 as search efforts continue.

Gov. Andy Beshear called it the “most severe tornado event in Kentucky’s history.”

While Kentucky is the hardest hit, tornadoes also touched down in Arkansas, Illinois, Mississippi, Missouri and Tennessee.

The Koon family huddled together in the bathroom, knowing a twister was tearing a path of destruction toward them. They were “thinking we were going to die,” Jackie Koon said. And then it arrived.

“We all went flying and ended up way on the other end of our neighbor’s house,” she said.

While the tornado pulled the house apart, every member of the family was spared.

“I’m surprised we all made it out alive,” the post said.

But in the immediate aftermath, they had no idea how lucky they were.

“Whenever it subsided and I looked up, my 4-year-old little boy was just standing there screaming for daddy,” Doug Koon told MSNBC in an interview.

With the tornado passed, he immediately began searching through the rubble, guided by crying and moaning, gathering his scattered family back together one at a time, some half-buried by debris, he told the outlet.

“It’s the most traumatic thing I’ve ever been through,” he said. “I felt like I was helpless in protecting my kids against it.”

Doug Koon found their baby girl, Oaklynn, out in the open, in her car seat, which they strapped her into in hopes it would give her just a little bit more protection if the worst happened, he told MSNBC.

That was a fateful decision.

“If Oaklynn wasn’t in her car seat she wouldn’t be here today,” Jackie Koon said in a post.

As grateful as the Koons are, their struggle isn’t over.

Oaklynn’s condition worsened overnight and she was life-flighted to a hospital, where she’s been intubated after possibly suffering a stroke, a post said.

“Hold your loved ones tight,” the post said. “I never imagined having to go [through] something like this in life.”

Kentucky tornadoes: How big? How strong? How did they rate and more answers

What happened inside factory in tornado’s path? And other questions KY needs answered.