Home World When it comes to China, Biden sounds a lot like Trump: FiveThirtyEight 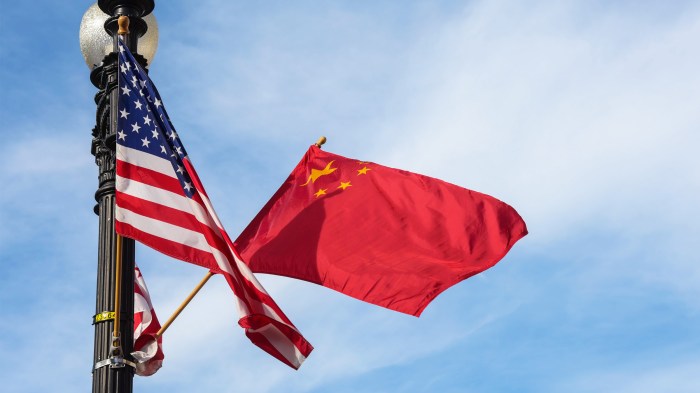 President Biden hasn’t been shy about undoing the legacy of his immediate predecessor. It was a rallying cry of his presidential campaign, and as such it has defined his first eight months in office. On Biden’s first day in the White House, he signaled climate change would once again be a top issue by bringing the United States back into the 2015 Paris Agreement, which Donald Trump had withdrawn from when he was president. Biden also reversed Trump’s ban on transgender Americans serving in the military and has taken a number of steps to repudiate a president who made white identity politics and racial resentment central to his message.

One notable exception is how Biden has handled America’s relationship with China. On this issue, Biden has hardly distanced himself from Trump: In fact, Biden’s tough-on-China approach has arguably been even tougher. Biden has kept in place many of the much-maligned Trump tariffs. He’s also harshly criticized China for its role in handling the coronavirus outbreak. And he’s taken to task its human rights track record and expressed support for an independent Taiwan, two things the Trump administration also did, albeit at the last minute.

There are, of course, important differences between Trump and Biden; namely, Biden is far more multilateral and cooperative in his approach to foreign policy in general. By and large, though, Biden’s approach to China has resembled that of Trump’s, which is notable in our deeply polarized political era when moments of consensus between the two major parties are rare. That said, Republicans and Democrats are still considerably divided over what America’s relationship with China should look like, which is why U.S.-China relations are unlikely to create an opportunity for bipartisanship going forward, even if both parties consider China an adversary.

To understand why Biden’s approach to China is often considered “Trump 2.0,” it’s important to first establish Americans’ attitudes toward China. Broadly speaking, Americans of all political stripes don’t view the country favorably. Though Democrats and Republicans disagree as to whether the Chinese government should be held responsible for the role it played in the coronavirus outbreak, Americans’ feelings toward the country have gotten worse since the start of the coronavirus pandemic.

A survey conducted by the Pew Research Center in February found that two-thirds of Americans — including 79 percent of Republicans and 61 percent of Democrats<a class="espn-footnote-link" data-footnote-id="1" href="https://fivethirtyeight.com/features/when-it-comes-to-china-biden-sounds-a-lot-like-trump/#fn-1" data-footnote-content="

“>2 and a February survey from Gallup found that 79 percent of Americans overall said their opinion of China was “mostly” or “very” unfavorable — by far the highest level of disfavor the polling firm has found since it started asking the question in 1979. That includes 41 percent of Americans who said they viewed China “very” unfavorably, up from 24 percent the year before.

Interestingly, though, it appears that China’s atrocious record on human rights, rather than its handling of COVID-19, accounts for more of the public’s dislike, which transcends parties. In fact, when asked by Pew to identify the first thing that comes to mind when they think about China, one-fifth of Americans — including 22 percent of Democrats and 21 percent of Republicans — said they thought about “human rights.” By contrast, just 7 percent of Americans said they immediately thought of COVID-19.

In recent years, China has come under fire for its harsh repression of political dissidents and ethnic and religious minorities, perhaps most notably the Uyghurs in northwest China. The Chinese government has been accused of engineering a campaign of mass internment and sterilization of Uyghurs, using a sophisticated system of wide-spread surveillance to carry out the abuses. The U.S. Senate has responded, in part, by passing separate bipartisan measures labeling the treatment of Uyghurs a genocide and banning the import of goods — alleged to be manufactured with forced labor — from China’s Xinjiang region. The Senate also allowed sanctions against China for human rights violations as part of a $250 billion bill passed in June.

Both Democrats and Republicans favor a “tough on China” approach when it comes to addressing those abuses, too. According to Pew’s February survey, 69 percent of Democrats and 72 percent of Republicans support promoting human rights in China even if it hurts economic ties between the United States and China. By contrast, only 29 percent of Democrats and 24 percent of Republicans favor strengthening economic relations even if it entails not addressing human rights. And though there’s been less polling on Americans’ views of China-Taiwan relations, clear majorities of Americans support recognizing Taiwan as an independent country, including it in international organizations and signing a U.S.-Taiwan free trade agreement, according to a July survey from the Chicago Council on Global Affairs.

Of course, though, many Americans also view China as a serious economic threat. Roughly 9 in 10 Americans would describe China as a “competitor” or an “enemy,” while only 9 percent consider it a “partner,” according to Pew’s February survey. Half of Americans also thought that China — not the United States — was the world’s leading economic power, per Gallup, and over 60 percent of Americans believed that China’s economic power would pose a “critical” threat to the United States over the next 10 years. Lawmakers in Washington have taken notice, as well, with the Senate’s $250 billion June bill heavily investing in science and technology so that the United States can stay competitive with China.

Notably, however, Americans are generally skeptical of the net benefit that tariffs, including those on goods from China, provide the United States, with 44 percent of Americans saying the measures were bad and 30 percent saying they were good (23 percent thought they had no net effect), according to Pew’s February survey. Republicans were not only more pro-tariff than Democrats but also more likely to support a tougher economic approach to China more generally.

It’s not just a question of how tough to be economically toward China, either. There are some fairly clear limits to bipartisanship when it comes to addressing China’s ascendancy. Roughly half of Republicans in that February Pew survey thought of China “as an enemy” of the United States, while only one-fifth of Democrats felt the same way. And according to a July 2020 survey from the Chicago Council, strong majorities of Republicans supported significantly reducing trade between the United States and China, even if American consumers have to pay more for goods; restricting the exchange of scientific research between the two countries; and limiting the number of Chinese students studying in the United States. Democrats, meanwhile, were by and large opposed to all three proposals.

As a long-term foreign policy goal, curbing China’s influence also ranks as a higher priority for rank-and-file Republicans than Democrats: 63 percent of Republicans think that the U.S. should make it a top priority to limit the power and influence of China, while just 36 percent of Democrats agree. To that end, Pew found in a July report that members of Congress — particularly Republicans — grew more outspoken about China on social media in 2020, often using accusatory language surrounding the pandemic or intellectual property theft.

“The biggest difference [between Biden and Trump on China] is that the Trump administration was more unilateralist and even weakened some of our alliances and partnerships, but the Biden administration has come in determined to build coalitions with the countries that share our values and interests,” said Bonnie Glaser, director of the Asia Program at the German Marshall Fund of the United States.

Yet still, some have argued that an ascendant China could be just the kickstart that America needs to escape an era of hyper-partisanship. But though there is significant room for bipartisan agreement on some of the issues surrounding China in American politics, it is not clear that this is enough for U.S.-China relations to really become a bipartisan issue.

Rachel Myrick, a professor of political science at Duke University, has found in her research that security threats from foreign foes don’t consistently reduce polarization. Looking across dozens of cases since the start of the 20th century, Myrick found little evidence that such threats reduced polarization; rather, she found that the responses to these threats often reflected already existing partisan dynamics. The assumption that a rising China will bring about domestic unity, Myrick argued in The Washington Post in June, “may be faulty to begin with.”

“We shouldn’t expect external threats to inherently be unifying,” Myrick wrote in an email to FiveThirtyEight. “That doesn’t mean, however, that there aren’t some threats that will be. Unsurprisingly, the most unifying threats historically have been severe and direct attacks on American soil. In response to the 9/11 attacks, for example, we saw memorable displays of national unity and a sharp drop in polarization.” But, as Myrick pointed out, those types of galvanizing events are few and far between. “Most security crises involving the U.S. tend to have little to no persistent effects on polarization, either among policymakers or among the American public.”

As for whether the United States would rally around beating back China the way it did with the Soviet Union after World War II, Myrick is not convinced. She pointed to the differences in the domestic political environment from that era to this one, highlighting that while Republicans and Democrats increasingly see China as a threat, they are divided on how to respond. She also pointed out that the United States is far more enmeshed with China economically than it was with the Soviet Union, and that American competition with China is “much less about military power and much more about economic competition.”

Of course, the dynamics at play here go beyond the narrow scope of American domestic politics. For instance, a lot has to do with what China itself does — if it keeps using economic and military coercion toward its neighbors, America’s posture will likely be adversarial.

But some experts do think that the tension between China and the U.S. could have a unifying effect. Jordan Schneider, a China technology analyst at the Rhodium Group and host of the ChinaTalk podcast, told FiveThirtyEight that increased competition with China on issues like climate change is such an example. “If everyone agrees climate change is a problem, this could be something that actually boosts China’s image abroad, and the same thing with Biden,” said Schneider. “So you could end up in a Cold War circa 1960s and ’70s dynamic, where it’s actually the tension that helped push forward some human rights changes both in the Soviet Union and in the U.S., more famously with Civil Rights legislation.”

Myrick, too, acknowledges there will be some opportunities for bipartisan cooperation on various aspects of U.S.-China policy. “I think we’ll see a fair amount of bipartisanship in the short term on aspects of technology competition, for example.” But she did stress that “[e]xpecting a growing ‘China threat’ to resolve partisan divisions in American politics seems misguided.”

All of that is to say that even on the issues that Americans seem the least politically divided on, existing partisan polarization is still likely to rule the day — if not factors outside of most Americans’ control. And if the past two decades of foreign policy are any lesson, there’s nothing that says that America’s current bipartisan consensus on China is stable — or that it will lead to a less divided United States.