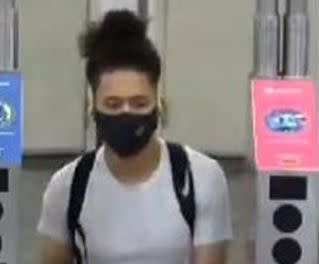 A Brooklyn mom kicked down a subway escalator by a complete stranger says she’s covered in claw marks from her tumble down the metal stairs — and terrified of ever seeing her attacker again.

Speaking on condition her name not be published, the 30-year-old fashion design student said she was on her way home when she was assaulted at the Atlantic Ave.-Barclays Center station Thursday evening.

“I was coming home from school. I didn’t run into this man. I did not have any prior engagement with him,” the victim said.

She was near the top of the escalator when the man shoved past her.

“I said, ‘Say excuse me.’ Just those three words,” the victim said. “And then I looked the other way. He aggressively responded, ‘I did say excuse me.’”

The man turned around, she recounted — “And boom, he automatically kicked me in the chest. Oh my God, it was from the top of the escalator at Barclay Center all the way to the bottom.”

Video shows the alarming attack, and how the victim tumbled down the moving stairs past another commuter who did nothing as she fell.

“This was more than stairs. Escalators are spiky and moving. They’re bigger and sharp,” she said. “All over my body. I’m covered like I was clawed by a tiger.”

The attacker walked up the steps and left the station. The young mom refused medical attention at the scene, even though she knew she was hurt, with a sprained left ankle, an injured right knee and open cuts.

“I just didn’t want to sit in an emergency room. I just wanted to go home to my 9-year-old, my family,” she said. “I’ve been limping for days.”

As for the attacker, she said, “I’ve never seen him before, and I hope he’s never seen me before. And I hope I never see him again.”

“You could see he was an aggressive and abusive person. He was pushing other people on the escalator.”

Police are asking anyone with information on the suspect to call Crime Stoppers at (800) 577-TIPS.

“It’s important that someone like him gets caught. He’s dangerous. He did it in front of people in broad daylight,” the victim said.

She said she learned two lessons from the attack — ones her family had already tried to teach her.

First, she said, she had music playing in her earbuds. “Even if he had said ‘excuse me,’ I didn’t hear it. I learned we have to be more conscious of sounds and people around you,” she said.

And second, she said: “I have clearly learned from this not to let anyone too close to me.”