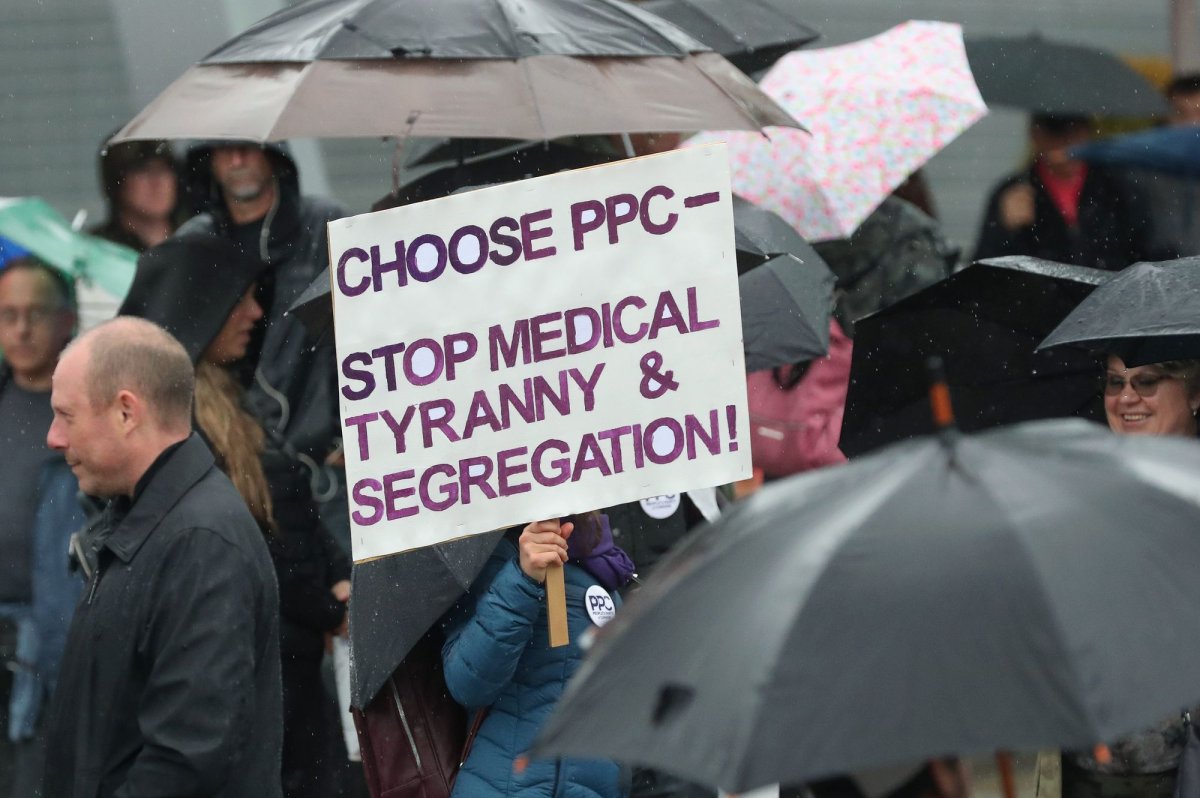 Sept. 5 (UPI) — Coronavirus worldwide, despite nearly 65,000 deaths and nearly 4.3 million cases in the past week, is leveling off with 8% declines for each category, with every continent dropping except Europe in fatalities.

Some places have shown increases, including Canada, which has had a fraction of the cases and deaths of its southern neighbor, the United States.

Conversely, Canada’s deaths increased 9% and cases rose 19%. But the numbers are a fraction of the United States and Mexico with 118 fatalities and 24,953 infections over seven days.

Canada has the best vaccination rate of the three largest countries in North America with Canada’s one-shot vaccination rate has risen to 74.5% for the total population, according to Bloomberg tracking. In the United States, it is 62.3% and Mexico’s vaccination rate is 45.7%, though it was the first Latin American nation to begin vaccinating people.

Worldwide, vaccination doses grew by 260 million in one week to 5.46 billion with the world’s population of 7.9 billion.

Europe has administered 100 doses per 100 people, followed by North America at 95, South America at 85, Asia at 78, Oceania at 58 and Africa at 7.8, according to tracking by The New York Times. Most vaccines require two shots with boosters also occurring.

Despite strong vaccination numbers, modeling by the Public Health Agency of Canada shows boosting rates among young people and continuing masking and social distancing, the nation would avoid record cases in the fall.

If the current rate of COVID-19 transmission holds, the country could be reporting as many as 15,000 new daily cases by the middle of this month. But decreasing spread 25% could cause the case numbers to plateau, and then decrease later in September.

More than 84% of eligible people had received at least one dose 77% percent were fully vaccinated, according to data through the end of last month.

“We have a window of opportunity to rapidly accelerate vaccine uptake and close the protection gap in younger age groups with the lowest vaccine coverage,” Chief Public Health Officer Theresa Tam said at a news conference Friday.

Ontario, British Columbia and Quebec are in the process of implementing vaccine passports.

In North America, the United States’ non-essential travel ban with Canada and Mexico has been extended to Sept. 21. It began one year ago in March. Earlier, Canada announced it was reopening to vaccinated Americans.

Mexico has never closed its air borders or required incoming travelers to go into mandatory quarantine.

But state tourism ministers want the federal government to implement new coronavirus-related health and safety protocols. They want travelers to present a COVID-19 vaccination certificate or a negative test result.

Over one week Brazil’s fatalities have dropped 10% with 609 Saturday and infections 13% with 21,804 most recently.

On Saturday, Brazil’s federal health regulator Anvisa suspended the use of more than 12 million doses of a vaccine developed by Sinovac Biotech produced in an unauthorized plant.

Meanwhile, researchers in Brazil have found venom from the Jararacussu pit viper slowed down the reproduction of coronvirus in monkey cells, according to a study.

Although India is a prime manufacturer of vaccines, the nation has only vaccinated 38% of its population with at least one dose and 11.4% fully.

But India administered 180 million doses in August, more doses than all G7 countries put together with 101 million.

“Yet another achievement! With more than 180 million vaccine doses administered in the month of August, India leaves a mark on the global map of leading its way in vaccinating its population on priority,” the government posted on Twitter.

The highly contagious Delta variant was first detected in India last October and has become the dominant strain worldwide.

Indonesia’s vaccination rate is 24.7% for one dose.

Despite the surge, Japan’s cases percentage is lower than elsewhere.

But Japan is lagging in vaccinations with 58.4% of the population getting at least one dose, according to tracking by Bloomberg.

The nation will issue online vaccination certificates starting in December.

The state of emergency, including a soft lockdown, is slated to end in Tokyo and other regions on Sept. 12.

The pandemic began in late 2019 in Mainland China, but the nation has reported only a few deaths in the past 12 months and stands in 75th at 4,636 behind Ethiopia with 4,749. China added 28 cases Sunday and had administered more than 2.1 billion doses, the most in the world and dwarfing India with more than 687 million and the United States with more than 373 million, according to tracking by Johns Hopkins University.

But the curfew on cafes and restaurants in the capital area was extended one hour to 10 p.m. And families are allowed to gather in groups of up to eight people in the week of the Sept. 21 Chuseok holiday.

Israel, which is considered part of Asia, has a death toll of 7,154 with 25 reported Saturday and 8,663 cases with the record 20,523 Wednesday. Until late last month, Israel only twice exceeded 10,000. The nation has vaccinated 66.4% of its population with at least one dose.

Despite the good vaccination rate, Israel has one of the world’s highest infection rates: 119,507 per million people, slightly less than the United States 122,314.

On Saturday, Israel’s national coronavirus czar called for the country to make plans to eventually administer fourth doses of vaccine with modifications to better handle variants, including the highly contagious Delta. Most nations hadn’t even begin a third booster.

“Given that that the virus is here and will continue to be here, we also need to prepare for a fourth injection,” Salman Zarka told Kan public radio. “This is our life from now on, in waves.”

Last week, the Health Ministry announced that the Green Pass system, which allows entry into certain gatherings and public places for those who are vaccinated or have recovered from the coronavirus, will expire six months after the holder received their second or third dose.

Coronavirus remains at high level in Russia, which reported 793 deaths Sunday after a record 819 Aug. 14. Cases were 18,645 compared with the record 29,935 in December. In the past week, deaths’ increase was virtually unchanged and cases went up 2%.

The 27-nation European Union announced Tuesday it was recommending removing the United States from its “safe travel” list, meaning American travelers would face restrictions that include quarantine and testing. It is up to each nation to implement the change. Israel also was added to the list.

The EU launched the vaccine certificate, which allows for free movement of travelers between its countries though each nation can implement restrictions

The United States continues to have a travel ban for European travelers since one year ago March with a quarantine, including being fully vaccinated.

People who have been fully vaccinated can visit England without needing to quarantine.

South Africa has vaccinated just 16.6% of its population with at least one shot.

Only nine African nations have met a goal of meeting a World Health Organization of vaccinating 10% of their population by the end of this month.

“The inequity is deeply disturbing. Just 2 percent of the over 5 billion doses given globally have been administered in Africa,” Dr. Matshidiso Moeti, WHO regional Director for Africa, said in a news report by the United Nations. “Yet recent rises in vaccine shipments and commitments shows that a fairer, more just global distribution of vaccines looks possible.”

New Zealand’s deaths increased by one to 26 on Saturday, the first one reported since Feb. 16 and Australia’s toll increased to 1,039, with three reported Sunday and 43 in a week after 15 the previous week.

New Zealand reported 20 cases Sunday and Australia was up 1,606, one day after a record 1,742 Until August, the record was 71 on one year ago July. Most of the cases are in New South Wales, which includes Sydney.

Sydney has been a lockdown for two months and it is scheduled to end Friday.

Victoria, which includes Melbourne, has a lockdown that was extended until Sept. 23.

“What we must do is suppress case numbers sufficiently to buy us time to get people vaccinated. What that means is that we can’t ease restrictions today in any profound way,” Victorian Premier Daniel Andrews said last week. “We are in for a difficult time, a challenging time over these coming weeks.”

Australia has vaccinated 49.9% of its population and New Zealand is at 49.1%.

Last week, Guam was added to the list of nations the U.S. Centers for Disease Control Prevention says to avoid traveling.

And Guam has suspended its “Air V&V” for “vacation and vaccination” that attracted mostly tourists from Taiwan.

“For someone who’s used to city life, Guam feels like paradise, but only for the first week or two. If I had to spend longer here, I would probably get bored.”